LIFE WITH THE AFTERLIFE

There’s another case I’ve been working on just as long as I’ve been learning about the Mount Washington Hotel. That one is a little bit closer to my home. It involves one particular ghost I’ve been searching for for over a decade.

The Lizzie Borden House, in Fall River, Massachusetts, is the site of one of the country’s most infamous crimes. Even if you don’t know much about New England history, you’ve probably heard the rhyme about the ax and the forty whacks. Andrew and Abby Borden were murdered with an ax in 1892, and Andrew’s daughter (Abby’s step-daughter) Lizzie was tried and acquitted of the crime. The trial became one of the most widely circulated news stories of the day, and even though Lizzie was set free, she was never truly forgiven by the public as they suspected she was the true killer.

Because  I  live in the area,  I  go to investigate that house often. Over the last ten or so years, I’ve been there to investigate probably a dozen times, both with small groups and to film TV episodes. In Season 3 of Kindred, we investigated the Lizzie Borden House because one of the guides, Sue, felt as though she was being specifically targeted with a different kind of activity. We made contact with who we believe is Andrew Borden, but we found that the activity we were investigating was really coming from Sue’s grandparents, who were trying to send her a message that they were waiting for her ailing father when he was ready to move on. He passed away just days after we investigated the home. I hope knowing his parents were waiting for him made Sue’s pain a little bit more bearable.

Over the years, I’ve witnessed a lot of paranormal activity in the home where the murders took place. It’s a great spot to bring people who are just learning to investigate, because something almost always happens there. The more I investigate the Borden House, the more I realize that even though there is strong activity, none of the activity is interacting with me. My guess is that what’s occurring in the house is a highly residual haunt, where there is a lot of energy in the space, but that it’s not necessarily from active ghosts. I think the supernatural energy is increased by people coming into the house knowing about the murders and the legends about Lizzie, and they bring all their own speculations and hopes to see something spooky. There are artifacts and newspaper clippings all over the home and the gift shop. The energy of the Borden House is fed often, and fed well, by one of the most notorious true crime cases in American history. 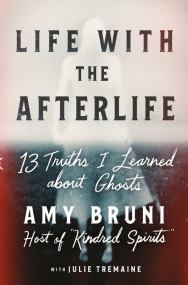 In all the times I’ve been to that home, I’ve never spoken to Lizzie Borden. But on Season 4 of Kindred, Adam and I were finally able to investigate another place that cracked the mystery wide open for us.

Maplecroft, in another part of Fall River, is the home that Lizzie and her sister Emma moved to after the death of her parents. They had inherited the family’s money, and bought a much larger home that served as a sanctuary away from the prying eyes of the town.

Lizzie lived in that home for more than thirty years, until her death in 1927. When we arrived to film an episode there, Maplecroft had never been investigated by ghost hunters. We were the first people to investigate the space in over ninety years.

The woman who owns the Lizzie Borden House purchased Maplecroft, and was preparing to open the building to the public. The previous owners had told her it wasn’t haunted, but once she and her employees spent time there, they started witnessing a lot of activity. They would hear loud footsteps, the disembodied voice of a woman, and laughter at strange times. Before we started investigating, we brought Chip Cof- fey in to get his impressions of the home. So he wouldn’t see where he was or get any clues that might influence his reading, we brought him in blindfolded.

“All of a sudden I’m very agitated and upset,” he said. “There’s a sense of being out of control. I’m being hit by every kind of emotion. I’m trying to get a grip on my emotions and I just can’t. I hear: Stop, leave me alone.”

He was picking up the spirit of a woman who was getting increasingly angry. “‘You all think you know everything,’” he reported her saying. “‘You know nothing about me.’”

“She’s screaming, ‘DON’T HELP ME,’” Chip added, then repeated more of her words. “‘You got him blindfolded. You think you’re smart. I don’t care what you think. I have to look right. I won’t crack. I’m sorry.’”

As part of our research, we spoke with historian Christopher Daley about Lizzie. “It’s America’s Jack the Ripper case,” he said, “and people are going to be talking about it forever.”

Christopher went on to explain why Lizzie chose to remain in Fall River, when almost the entire town had turned on her, suspecting her of murdering her parents even though she had been acquitted of the crime. “She said, ‘When the truth comes out about this murder, I want to be living in Fall River so I can walk downtown and meet those of my friends who have been cutting me down all these years.’”

He also told us a  key piece of information.  After the trial, Lizzie adopted a new name, Lizbeth. That’s what’s on her gravestone, even though her birth name is Lizzie, and it’s how she chose to be addressed for all her adult life.

The night before, we had gotten an EVP response of the name Lizzie Borden. We really thought we might have been talking to her—but besides that one answer, she hadn’t said much of anything. From what Chip indicated, she did not care to speak more.

Thinking she had given us her name as a sassy response, Adam suggested approaching that night’s investigation in a different way, by removing all the things in the home that discussed murder in any way. “We need to make her comfortable if we’re going to get any answers,” he said. “We need to make this feel like her home.”

So that evening, we set about making Maplecroft an ax murder–free zone, narrating our actions as we went so she would see and hear what we were doing. We made sure to speak to her using the name she chose to go by, as a sign of respect, and we reassured her that we only had good intentions and didn’t want to exploit or sensationalize her past. Then, we set up a spirit box experiment designed to make Lizbeth feel as comfortable as possible. I went upstairs to a sitting room, while Adam stayed downstairs and asked questions through a walkie-talkie.

“My friend Amy is upstairs,” he said. “I’d love for you to reach out to her please. Can you tell her your name?”

“Yes, they’re going to talk to you directly.”

“The people that own this house now also own the house—”

Don’t say anything. It’s not me.

“People are going to ask you about what happened on Second Street. We’re trying to warn you and let you know, to see if that’s okay with you.”

Please talk to them. Are you there?

“So you’re saying it’s okay for people to come talk to you about your past?”

I felt someone walking through the room, but no one was there.

“Do you miss someone, Lizbeth, from your past?”

We had just had a full conversation with the ghost of Lizbeth Borden, maybe for the first time ever.

I was hearing full sentences, which almost never happens with ghost replies in EVP sessions or spirit box experiments. It was hard to hear, though: She seemed so conflicted and lonely. I think the only reason that Lizbeth chose to speak to us is that we broke the ice with her, and treated her with kindness, even though we were looking for one of the most sought-after spirits of all time, who may or may not be a murderer. We don’t know for sure. I do know that she has a lot of people calling out for her, and I haven’t heard of another time when she answered.

By the end of it, I felt like Lizbeth was my friend. So even though one of the producers was really pushing for us to ask her if she was guilty, we wouldn’t do it. We would have violated the trust we’d built with her, and everything we had worked for. Adam and I never asked her if she did it. If we did, we would have been lying to her the whole time when we promised not to talk about the murders.

The Lizzie Borden case may be one of the most notorious American true crime stories, but we’ll never have any answers—and that’s because Lizbeth wanted it that way. There’s a law firm in Boston that has all of her files and the paperwork on the case, and they are locked up to this day. She made that firm sign paperwork stating they would guard that information in perpetuity, and never unseal those files. So the answer is sitting just over fifty miles from where the crime happened, and it will never be revealed.

Amy Bruni, co-star of Kindred Spirits and one of the world’s leading paranormal investigators, has learned a lot about ghosts over her years of research and first-hand experience. Now, in Life with the Afterlife, she shares the insight she has gleaned and how it has shaped her unique approach to interacting with the spirits of the dead and those who encounter them.
From her earliest supernatural encounters as a child, through her years appearing on Ghost Hunters and the creation of her company Strange Escapes, which offers paranormal excursions to some of America’s most notoriously haunted destinations, and into her current work on The Travel Channel’s Kindred Spirits, this book is full of astonishing and deeply moving stories of Amy’s efforts to better understand the dead but not yet departed. With Amy’s bright humor and fierce compassion for both those who are haunted and those who are haunting, Life with the Afterlife is an eye-opening look at what connects us as people, in life and beyond.