The set-up for Netflix’s Pieces of Her is pretty much guaranteed to keep you watching. Squabbling mother and daughter Laura Oliver (Toni Collette) and Andy Oliver (Bella Heathcote) sit in a diner in the cozy town of Belle Isle, Georgia, having lunch. They’re arguing about Andy’s lack of direction in life as she turns 30. Andy came back to town to take care of Laura during Laura’s cancer treatment, but now that Laura is in remission, she wants Andy to move on.

All of their bickering seems irrelevant once a man in the diner pulls a gun, killing two women and sending patrons running for cover. When it looks like he’s about to shoot Andy, too, Laura responds, acting on instinct and killing the man quickly and mercilessly.

In that moment, Andy realizes that she doesn’t know her mother at all. The incident is caught on video, and it soon goes viral, making the local and national news and setting off a chain of events that upends the comfortable lives that Laura and Andy have been leading. Over the course of eight episodes, Pieces of Her reveals explosive secrets about Laura’s history and the danger that she’s been attempting to escape for the past 30 years. The series delivers a steady stream of twists, while keeping the story grounded in the fractured relationship between Laura and Andy.

Those twists and that relationship both come from author Karin Slaughter, who wrote the book that Pieces of Her is based on and serves as one of the series’ producers. Series creator Charlotte Stoudt brings the story to life, making Pieces of Her into the TV equivalent of a page-turner, even if it occasionally flags over the course of nearly eight hours.

The story unfolds over multiple timelines, delving into Laura’s experience as a young woman (played by Jessica Barden) involved in a terrorist organization trying to bring down pharmaceutical mogul Martin Queller (Terry O’Quinn). It’s not hard to connect the younger version of the character to her older counterpart, but Collette and Barden give distinctive performances as a woman who has essentially lived her life as two different people.

In the present day, Laura sends Andy on the run with only brief instructions, and no explanation for why there are dangerous men now after her. Andy alternates between trying to stay safe and putting herself at risk in order to find out the truth, while Laura is forced to confront the past that she’s spent half of her life avoiding. While Collette has the showier role, dealing with Laura’s decades of built-up anguish, Heathcote carries the series as the character driving the plot, leading the audience to new answers about Laura’s troubled and deadly background.

Like a lot of modern miniseries, Pieces of Her probably could have been tightened up a bit, and some of the flashbacks fill in details that didn’t really need filling in. But whenever there’s a lull, it’s pretty quickly followed by another shocking development to move the plot forward. And thanks to Collette, Heathcote, and Barden, the characters are sympathetic and complex even when the show is just spinning its wheels. It’s a wide-ranging, suspenseful family drama spinning out of that one sudden, unexpected moment. 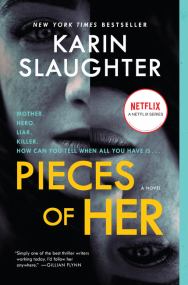 This item is a preorder. Your payment method will be charged immediately, and the product is expected to ship on or around May 21, 2019. This date is subject to change due to shipping delays beyond our control.