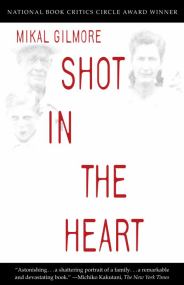 Shot in the Heart is a deeply affecting personal memoir about the life and crimes of 1970’s convicted murderer Gary Gilmore, written by his younger brother, Mikal.

Now, Gary Gilmore was already exhaustively covered in Norman Mailer’s Pulitzer Prize-winning novel, The Executioner’s Song. However, Shot in the Heart tells the real, first-hand account of how the Gilmore boys grew up in a profoundly dysfunctional family.

In a house filled with substance abuse, child abuse, cheating and crime, Mikal's perspective offers in-depth insight into what made Gary grow into the violent murderer he became. While his brother, Mikal, channeled his energy into getting out and saving himself, Gary continued on the troubled path set forth by their family. He perhaps even believed that he was born inherently bad.

In 1976, Gary was convicted on two counts of murder and sentenced to death, which he did not wish to appeal. Despite others appealing on his behalf, Gary was, in the end, executed. His last meal was steak, potatoes, milk, and coffee. He only drank the milk and coffee. On January 17, 1977, at 8:07 am Gary Gilmore was executed by firing squad at the Utah State Prison in Draper, Utah.

This item is a preorder. Your payment method will be charged immediately, and the product is expected to ship on or around August 1, 1995. This date is subject to change due to shipping delays beyond our control.