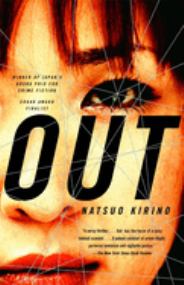 In an industrial suburb of Tokyo, four factory coworkers trapped in abusive relationships, mountains of debt, and mind-numbing jobs come together when one of them snaps and kills her abusive husband.

After they dismember and dispose of the body, the women begin violently ridding themselves of all their problematic relationships in much the same manner, only to find worse problems surface in their wake.
Out is at once black noir and black comedy, a meticulous glimpse into the lives of Japanese housewives and a searing commentary on the to-the-death war continually waged between the sexes in the sprawling cities and complex cultures that imprison them together.

Livia Llewellyn is a writer of dark fantasy, horror, and erotica, whose short fiction has appeared in over forty anthologies and magazines and has been reprinted in multiple best-of anthologies and two Shirley Jackson Award-nominated collections, Engines of Desire and Furnace. You can find her online at liviallewellyn.com and on Instagram and Twitter.