Bundle up and get comfy with one of these perfectly cozy mysteries filled with just the right amount of intrigue and excitement. 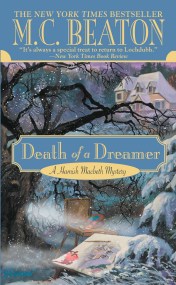 Death of a Dreamer

The rugged landscape of Scotland attracts dreamers who move north, wrapped in fantasies of enjoying the simple life. They usually don’t last, but it looks as if Effie Garrard has come to stay. When Constable Hamish Macbeth calls on her, he’s amazed that she weathered the difficult winter. But Effie is quite delusional, imagining that she’s engaged to local artist Jock Fleming. Later, Effie is found in the mountains, poisoned by hemlock. 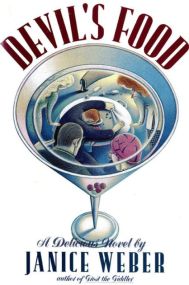 A sly, witty mystery features two extraordinary sisters–one a master chef and the other a renowned actress–who juggle husbands, lovers, the Hollywood media, and their own identities to catch a thief. By the author of Frost the Fiddler. 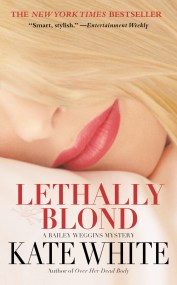 Whenever a celebrity throws a phone, crashes a car, or kills a spouse, celebrity journalist Bailey Weggins is there to cover it for the gossip magazine Buzz. Now, the new television show Morgue is the talk of the town, and just as Bailey starts reminiscing about her brief summer fling with the show’s gorgeous star, Chris Wickersham, he calls.

But Chris isn’t thinking about rekindling their old flame. His friend and fellow actor on the show has gone missing, and while nobody else seems to be alarmed, Chris can’t believe his friend would just run off while on the brink of stardom. When Bailey starts to investigate as a favor for Chris, she soon realizes there is much more to the disappearance than meets the eye, and unless she can unearth the truth, she could become the inspiration for Morgue’s next episode. 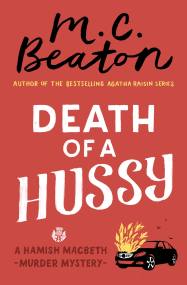 Death of a Hussy

About the best that can be said of wealthy Maggie Baird is that inside her middle-aged body, there still beats the heart of a beautiful tart. So when her car catches fire with Maggie in it, there are five likely suspects right on the premises of her luxurious Highlands cottage. Lochdubh police constable Hamish Macbeth has to question Maggie’s timid niece and four former lovers, one of whom Maggie had intended to pick for her husband.

All five are equally poor-with ample motive and opportunity to monkey with Maggie’s car. Now to find the killer, the astute lawman must apply his extraordinary insight into human nature. But when the evidence appears to point to the wrong person entirely, Hamish must dig down deep to stop the real murderer’s escape. 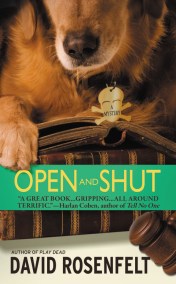 Whether dueling with new forensics or the local old boys’ network, irreverent defense attorney Andy Carpenter always leaves them awed with his biting wit and winning fourth-quarter game plan. But Andy prefers the company of his best friend, Tara, to the people he encounters in the courtroom. Tara, a golden retriever, is clearly smarter than half the lawyers who clog the courts of PassaicCounty. However, just as it seems Andy has everything figured out, his dad, New Jersey’s legendary ex-D.A., drops dead in front of him at a game in Yankee Stadium. The shocks pile on as he discovers his dad left him with two unexpected legacies: a fortune of $22 million that Andy never knew existed . . . and a murder case with enough racial tinder to burn down City Hall. Struggling to serve justice and bring honor to his father, Andy must dig up some explosive political skeletons–and an astonishing family secret that can close his case (and his mouth) for good. 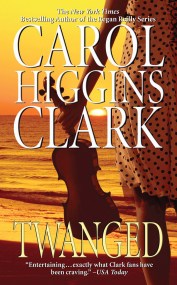 Regan Reilly plans to spend her Fourth of July week vacationing in the Hamptons at her parents’ home and also with her best friend, Kit, who has a share in a group house. A last-minute phone call, however, casts Regan’s trip in a new light. Brigid O’Neill, a rising country star, has been getting frightening “love notes” and she hires Regan as her bodyguard for a Fourth of July concert in Southampton. Brigid plans to play a fiddle given to her in Ireland and said to have magic powers. She later learns the rest of its legend–whoever takes it out of Ireland will have an accident or face death.

A guest found floating face-down in a pool at Chappy’s welcoming party for Brigid is only the first in a series of ominous incidents. As Brigid’s Fourth of July concert nears, it looks as if the cursed fiddle should be shipped back to Ireland–Express Mail! It’s Regan’s job to hold the curse at bay and fend off Brigid’s pursuers. 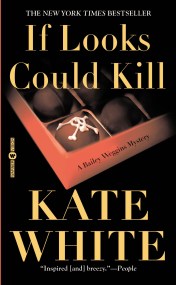 Bailey’s in bed with her commitment-challenged lover K.C. when she gets a frantic call from her high-maintenance boss at Gloss magazine. Grabbing coffee and a cab outside her Greenwich Village apartment-the consolation prize in her divorce settlement-Bailey reluctantly heads uptown. At Cat Jones’s Upper East Side town house, she finds something that seriously clashes with the chic decor: the dead body of the family’s live-in nanny. As Bailey-unofficially-delves into the murdered girl’s past, she finds no shortage of A-list suspects. But when a startling discovery suggests that Cat may have been the intended victim, Bailey is suddenly up to her bed head in a high-profile investigation that’s perfect fodder for a tabloid headline: Is someone trying to kill the editors of women’s magazines?

With the spotlight on New York’s glitzy media world, Bailey interviews back-stabbing editors, straying husbands, and one sexy, six-feet-two psychologist who could make her decide to kick K.C. to the curb. Sporting her pair of red slingbacks and armed with the investigative skills she’s honed as a true crime reporter, she sets out on a search that takes her from Manhattan’s exclusive Carnegie Hill area-the nanny heartland of America-to the ritzy weekend estates of Pennsylvania and Connecticut. Bailey will need all her street smarts and some lightning-fast detective work to catch a killer who could end up deleting her name from the masthead for good. 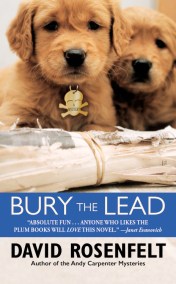 Defense attorney Andy Carpenter has been successfully avoiding taking on new cases until his sometime friend and newspaper owner Vince Sanders, calls and asks him for a favor. Daniel Cumming, Vince’s star reporter, is being used as the mouthpiece for a brutal serial killer. He has been cooperating with the police but Vince wants to make sure both the newspaper and Daniel are protected. Andy thinks the case will be a piece of cake . . . until Daniel is found unconscious in the park next to the killer’s latest victim. Daniel claims he intended to stop the murder but the police arrest him. A reluctant Andy plunges himself into the case. And as he learns more about Daniel’s shady background he begins to wonder how deadly the truth might be. 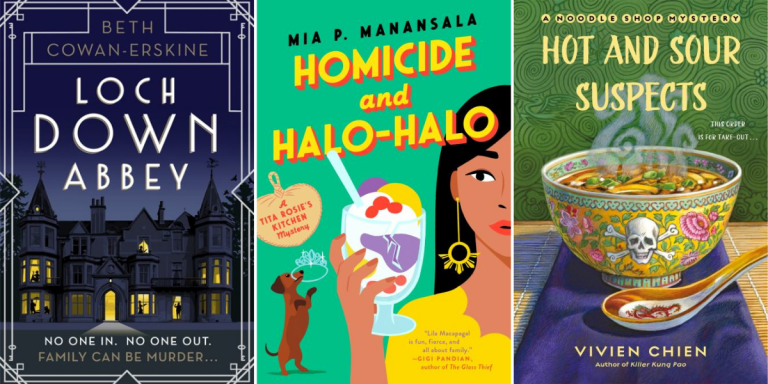 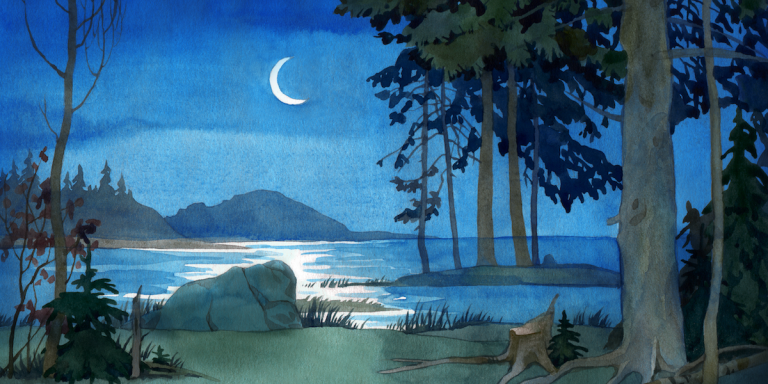 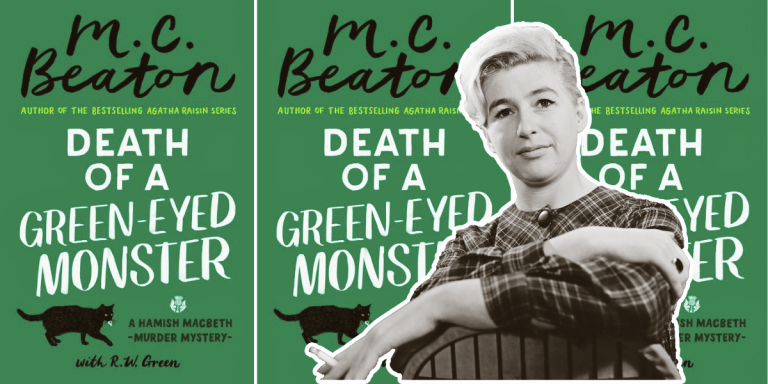