Sherlock Holmes is a character so famous that his name is more well-known than the author who created him, Sir Arthur Conan Doyle. Sherlock Holmes and the detective novels and short stories that feature him are over one hundred years old. And yet this fictional detective character remains an important and well-loved figure in pop culture. What is it about the Sherlock Holmes books that make them so enjoyable to readers? And why do we love Sherlock Holmes, a character who is so intelligent but also so emotionally distant?

The character of Sherlock Holmes first appeared in the short story “A Study in Scarlet,” which was originally published in Beeton’s Christmas Annual in 1887. While Sherlock Holmes himself is a fictional character, Sir Arthur Conan Doyle based his famous detective on a real person: Dr. Joseph Bell. Bell was a forensic scientist at Edinburgh University, and Doyle worked as a clerk for the doctor at the Royal Infirmary of Edinburgh. Dr. Bell was especially good at paying attention to minor details and drawing conclusions based on his observations. These powers of deductions would also become a defining trait for the Holmes character.

But Sherlock Holmes is more than just his deductive powers. The detective is knowledgeable in many subjects, including anatomy, chemistry, mathematics, law, and sensational literature, just to name a few. He also has a deep appreciation for music and plays the violin. Additionally, Sherlock Holmes is a physically imposing character, standing at six feet tall and being proficient in boxing, fencing, and singlestick. While Sherlock Holmes has a sharp wit and many physical strengths to match, the detective is by no means perfect.

Sherlock Holmes is logical to the point of being cold and dispassionate. He doesn’t really know or care to know how to interact with people, his assistant and roommate Watson being one exception.

Sherlock Holmes has no interest in romance or romantic relationships. Throughout the Holmes stories, the detective doesn’t have the kindest opinion of women in general. During Holmes’ deductions, he frequently makes sweeping generalizations about women which could be, by today’s standards, considered misogynistic.

Holmes also has an obsessive personality. When he gets stuck on an idea, he has trouble thinking of anything else. Then there’s the detective’s issues with drugs. When Holmes doesn’t have a case to keep him occupied, he frequently turns to drugs like morphine and cocaine, both of which were legal in 19th Century England.

So with all of his faults and character flaws, why are people so obsessed with this one detective character? It’s precisely Sherlock Holmes’s flaws that make him so fascinating. At first glance, Sherlock Holmes might seem more computer than man; he’s cold, highly calculating, far removed from emotion and sympathy, and extremely focused on his work. But there’s so much more to him than that. For one, we take comfort in the fact that he’s not good at everything. Yes, Sherlock Holmes understands the motivations of people, but he’s not actually good at interacting with human beings. Holmes also has his vices, and while readers might not share the exact same vices as the detective, most of us understand those impulses. Overall, readers love Sherlock Holmes for his weaknesses just as much as they admire him for his strengths.

Beyond that, there’s also the perspective in which we the readers receive the stories in Sherlock Holmes’ books. For the most part, we know about Sherlock Holmes through his companion Watson. While Watson does have his criticisms of Holmes and his strange behaviors, overall our narrator is fascinated by his friend’s intelligence and capabilities. We as readers have adopted the same fascination and love for Holmes that Watson has. It doesn’t matter that Holmes might be emotionally distant from most people. We as readers are nonetheless given a window into the detective’s inner life through Watson, and that feels especially intimate and special because we know how few people get to see this side of him.

While Sherlock Holmes is a character from 19th century Victorian England, most of the things readers love about him are qualities that are timeless. Holmes is amazingly intelligent and strong, but he’s also relatable. Sherlock Holmes remains the most popular out of all of the fictional detectives for these reasons. To this day, his stories are still inspiring retellings of all kinds, from new detective novels to television shows, to movies, and much more.

Our Favorite Books on Sherlock Holmes 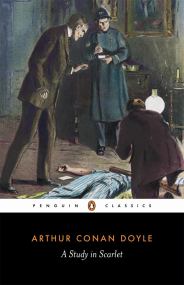 A Study in Scarlet is an 1887 detective novel by Scottish author Arthur Conan Doyle. The story marks the first appearance of Sherlock Holmes and Dr. Watson, who would become the most famous detective duo in popular fiction. The book's title derives from a speech given by Holmes, a consulting detective, to his friend and chronicler Watson on the nature of his work, in which he describes the story's murder investigation as his "study in scarlet": "There's the scarlet thread of murder running through the colourless skein of life, and our duty is to unravel it, and isolate it, and expose every inch of it." 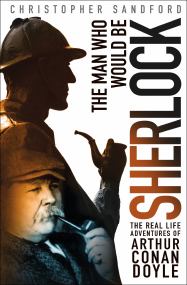 Though best known for the fictional cases of his creation Sherlock Holmes, Conan Doyle was involved in dozens of real life cases, solving many, and zealously campaigning for justice in all. Stanford thoroughly and convincingly makes the case that the details of the many events Doyle was involved in, and caricatures of those involved, would provide Conan Doyle the fodder for many of the adventures of the violin-playing detective.

There can be few (if any) literary creations who have found such a consistent yet evolving independent life as Holmes. He is a paradigm that can be endlessly changed yet always maintains an underlying consistent identity, both drug addict and perfect example of the analytic mind, and as Christopher Sandford demonstrates so clearly, in many of these respects he mirrors his creator. 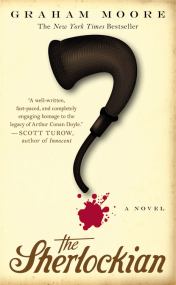 In December 1893, Sherlock Holmes-adoring Londoners eagerly opened their Strand magazines, anticipating the detective’s next adventure, only to find the unthinkable: his creator, Arthur Conan Doyle, had killed their hero off. London spiraled into mourning-crowds sported black armbands in grief-and railed against Conan Doyle as his assassin.
Then in 1901, just as abruptly as Conan Doyle had “murdered” Holmes in “The Final Problem,” he resurrected him. Though the writer kept detailed diaries of his days and work, Conan Doyle never explained this sudden change of heart. After his death, one of his journals from the interim period was discovered to be missing, and in the decades since, has never been found…. Or has it?