The cozy and amateur sleuth sub-genre often carries the label of being soft and light. But is that accurate? No matter how gently the author tiptoes around it, murder is violent even when it happens off-page. The same is true for the characters in the story. They must reflect reality. And part of that reality is expletives. People cuss. Some people more than others and at varying points on the vulgarity meter, but people cuss.

Cozy authors deal with expletives in all kinds of ways. Ellen Byron’s Grand-mere character from her Cajun Country Mystery series would never be crude. But even a gracious and elegant person has their boil point. In this passage, Grand-mere is trying to report a troll that has left a negative review about her family’s historic bed and breakfast.

“Every time I send an email, I get some form response thanking me for contacting Trippee, and warning me not every email can be answered individually. What does that even mean?! Oh, shi—ver me timbers, I got another one. Mu-mmy funny, there’s another. Ahhh!”

from A Cajun Christmas Killing

Leslie Budewitz takes a similar approach in her Spice Shop series by using creative substitutes like “holy marjoroly,” “parsley poop,” and “pain in the anise.”

In Kellye Garrett’s Hollywood Homicide, no foul language is a personality trait of her main character. That quirk makes Dayna’s final word (like literally the book’s last line) all the more impactful.

Alexia Gordon solves the dilemma of whether to use real curse words or creative versions of them by going Irish. Her protagonist, an American working in Ireland, hears all kinds of colorful UK colloquialisms.

“Because,” Sutton’s scowl deepened, transforming his brow’s ever-present furrows into crevasses, “any time there’s a dead body in this village, you know something about it.” He ran a hand over his thinning hair. “Feck, I hate mornings.”

from Execution in E.

The Kebab kitchen series by Tina Kashian takes a similar approach. Raffi, the father of her main character, uses Armenian expletives when they are called for. While Lucy Berberian, the protagonist, says “crap” when things get bad.

“Heather Banks is dead in the back parking lot,” Lucy blurted out. “The police are on their way.”

Raffi pushed back his chair and stood. “Asvadzt! My God! What has that crazy lady gotten herself into?” from Hummus and Homicide

While crap might be on the hardly-a-cuss word side of the spectrum, some cozy readers might unjustly ping a novel for it. Author Olivia Blacke went conservative with her cussing for her Brooklyn Murder Mystery debut. It was a deliberate choice, and as she told me, “…after spending the last 20 years with a sailor, [it] is NOT the way I talk in impolite company!”

And he made it look good.

Don’t get me wrong. Compared to twenty years ago, Brooklyn is freaking Disney.

“Shoot, is that Huckleberry?”

It was still solidly, stubbornly on the lock screen. Drat.

Mia Manansala took a middle-road approach in her Tita Rosie’s Kitchen series. The protagonist’s backstory is that she was raised in a hyper Catholic family. Thereby, it makes sense for Lila not to swear or take the Lord’s name in vain, but Lila’s grandmother does. Only it’s in Tagalog.

My Caribbean Kitchen series debut, Mango, Mambo, and Murder, has characters from Miami, the islands, and Latin American. I don’t drop any F-bombs, but I do have fun with Spanish cusswords and play with accents. Beach sounds like another word when it comes out of the mouth of Jorge, a Columbian character. My protagonist Miriam Quinoñes is Cuban-American like me. It would be inauthentic not to use a few carajos and coños. I had to keep it real.

Every cozy series world-builds a community with its own set of standards. Some are on the as pious as nun side of the spectrum, and others are on the as colorful as a sailor side. But they all have the commonality of people expressing emotions via expletives. There are no bad words, only societal norms. Damnit. 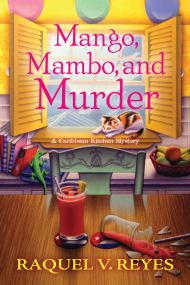 Food anthropologist Miriam Quiñones-Smith's move from New York to Coral Shores, Miami, puts her academic career on hold to stay at home with her young son. Adding to her funk is an opinionated mother-in-law and a husband rekindling a friendship with his ex. Gracias to her best friend, Alma, she gets a short-term job as a Caribbean cooking expert on a Spanish-language morning TV show. But when the newly minted star attends a Women's Club luncheon, a socialite sitting at her table suddenly falls face-first into the chicken salad, never to nibble again.
When a second woman dies soon after, suspicions coalesce around a controversial Cuban herbalist, Dr. Fuentes—especially after the morning show's host collapses while interviewing him. Detective Pullman is not happy to find Miriam at every turn. After he catches her breaking into the doctor's apothecary, he enlists her help as eyes and ears to the places he can't access, namely the Spanish-speaking community and the tawny Coral Shores social scene.
As the ingredients to the deadly scheme begin blending together, Miriam is on the verge of learning how and why the women died. But her snooping may turn out to be a recipe for her own murder.

This item is a preorder. Your payment method will be charged immediately, and the product is expected to ship on or around October 12, 2021. This date is subject to change due to shipping delays beyond our control.