Ever since Robert Ressler coined the phrase in 1974, serial killers have been a source of fascination. Everyone, from criminologists, to the FBI, to amateur true crime buffs have tried to get to the bottom of their psychology. Why do they kill? How do they choose their victims? And how can we use this knowledge to stop them?

Along with the scientific research, comes the cultural appeal. We love serial killers. Innumerable books, both novels and non-fiction, have been written about them. Films made, documentaries watched. You, a series about a psychopathic stalker, is one of the most watched series on Netflix. As I write this there are over 40 true-crime documentaries available on that same streaming service.

As an author of novels about serial killers, I get it. When I was writing The Echo Man I devoured over two dozen non-fiction books, and lost count of the amount of TV and podcasts I consumed.

John Douglas, the author of Mindhunter and the father of modern profiling, states that true crime is the perfect representation the human condition, and we love these mysteries because they become their own morality play, complete with heroes and villains and victims–often with a happy ending (the killer is caught.) David Wilson argues that reading and watching serial killers provides a “protective frame”–it’s scary but we know it’s not happening in real time in our lives, so we can enjoy the action.

Personally, my interest comes from their psychology. I studied it at university, and I find myself intrigued by the question: what makes the man? For example, why did Jeffrey Dahmer murder seventeen people, when his younger brother David grew up with much the same upbringing yet has never killed? What drove Ted Bundy to kill more than 30 women and girls when he had the potential to live a rewarding and fruitful life? (Multiple sources describe Bundy as charming and intelligent, someone who could have been a lawyer, yet something drove him to repeatedly rape and murder.)

In The Echo Man I try to explore this psychology with my own killer. As the novel progresses we see snippets of his upbringing, his family life, his thinking, as he stalks his victims and mimics the killers of the past.

And, through my research, I found out a lot of fascinating facts about the killers we have come to know.

Harold Shipman murdered around 250 people, putting him as one of the most notorious serial killers of all time. He is only exceeded by Pedro Lopez, a man believed to have killed over 300 woman and girls–who was released on parole in the late nineties. His whereabouts are currently unknown.

Policing, on the whole, does not shower itself in glory when it comes to serial killers. Peter Sutcliffe was interviewed nine times before he was arrested. Bundy escaped from custody, twice, allowing him to kill or injure at least another six women before he was captured. One of Dahmer’s victims, Konerak Sinthasomphone, escaped naked, mid-‘experiment’ (with muriatic acid injected into his brain), and saw policemen on the street, yet they still allowed Dahmer to take him back home with him, where he was subsequently killed.

Although often classified as a ‘serial killer’, Charles Manson wasn’t present at the murders of Sharon Tate and her four visitors, and didn’t participate in the subsequent LaBianca murders. He was, however, convicted of their murders (as they were said to have been carried out on his orders), as well as the first-degree murder of Gary Hinman and Donald Shea.

Apart for being known for the people he killed, Ed Kemper is exceptional in other ways. He is 6 feet 9 inches tall, with a higher than average IQ of 145. (Despite how the media likes to portray serial killers, as devious calculated geniuses, data from Radford University put the median IQ of serial killers as below average–at 89.)

But our interest in serial killers isn’t just academic–it can yield incredible results. In 2018, the name of the Golden State Killer was finally revealed as Joseph James DeAngelo. His discovery, and subsequent conviction, was down to combined efforts from law enforcement, the FBI, and a team of investigators and researchers, including the true crime author Michelle McNamara. Sadly, she died before DeAngelo was found, but her work was considered integral to the investigation.

So perhaps that’s the most compelling reason of all for our fascination as humans. The more we know about serial killers, the more questions we ask. The deeper we dig, the quicker it will be to catch them. And stop them before more people die. 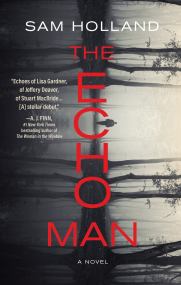 Detectives Cara Elliott and Noah Deakin are on the case of a series of seemingly unconnected murders, each different in method, but each shocking and brutal. As the body count increases, they can’t ignore the details that echo famous cases of the past—Manson, Kemper, Dahmer, and more. As Elliott and Deakin get closer to unmasking the killer, the murders are moving closer to home.
Meanwhile, Jessica Ambrose is on the run. She’s been implicated as the arsonist who killed her neglectful husband and injured her young daughter. With the help of disgraced and suspended detective Nate Griffin, Jess discovers a shocking link between her case and that of the ultimate copycat killer working on his horrifying masterpiece.

This item is a preorder. Your payment method will be charged immediately, and the product is expected to ship on or around April 5, 2022. This date is subject to change due to shipping delays beyond our control.