London Bridges Summary & Study Guide includes comprehensive information and analysis to help you understand the book. London Bridges, published in 2004 and set in the present, is a fictional account of Alex Cross, FBI Special Agent and his search for a madman named the Wolf. The Wolf threatens to bomb New York City, London, Paris, Frankfurt and Tel Aviv if his multi-billion dollar ransom demand is not met. He bombs a small town in Nevada right off the map to prove his point.

The Wolf enlists the help of an old antagonist of Alex Cross’s, the Weasel, by beating him bloody, hanging him naked by his ankles and shaking him senseless.

The book brings back protagonist Alex Cross, a former Washington, DC homicide detective and now FBI Special Agent. Alex is in the middle of a much-needed vacation, during which he flies to Seattle to visit his young son and then stops in San Francisco to see his girlfriend, Jamilla. He is still in the airport at San Francisco when he is approached by two Federal agents and told he must fly to Nevada immediately.

Alex arrives in Sunrise Valley, Nevada, or what used to be Sunrise Valley; a massive explosion has decimated the town, leaving nothing but sand, sage and scrub. The agents soon learn that a man was spotted filming the explosion with a video camera. He is someone Alex knows: a vicious psychopath named Geoffrey Shafer, also known as the Weasel.

Back home in DC, Alex and his FBI colleagues, along with CIA and Homeland Security staff, are called into a conference room at FBI headquarters to view the film they’ve been sent of the Sunrise Valley bombing. Suddenly the phone rings and the Wolf identifies himself. He insults them, boasts of his superiority and hangs up. Soon it is learned that there have been two more bombings – one in England and one in Germany. This time people are killed. When the Wolf calls again, he tells them that the next targets are New York, London, Washington and Frankfurt. He warns them not to investigate him and not to inform the public or he will attack immediately.

The FBI, CIA, Homeland Security, FEMA and the Domestic Emergency Support Team are mobilized to identify and stop the Wolf. A huge investigation is set up, one of the largest in history, employing both mobile and fixed surveillance. Knowing that the Weasel is involved, Alex desperately searches his files for clues, trying to recall everything he knows about him. When surveillance of the Weasel’s psychiatrist shows someone visiting her in a wheelchair (the Weasel had been known to use a wheelchair as a disguise), Alex bursts into the psychiatrist’s apartment; but he finds only an actor, not the Weasel. It was a trap. Now the Wolf knows that they ignored his warning not to investigate him.

After killing the CIA director, Thomas Weir, in a daring and ingenious plot, the Wolf calls again. He tells Ron Burns, the director of the FBI, that he was lucky, that he had been the original target. The Wolf warns them not to disobey him again and gives them his price to go away: a combined total from each city of over two billion dollars and the release of 57 Middle Eastern political prisoners – all within four days.

Alex pursues leads all over the world in a desperate attempt to track down the Wolf before he can make good on his evil threat. From Guantanamo Bay to Riyadh, from London to Paris, Alex endures what he considers the incompetence and blasy attitude of slow-moving bureaucrats who just get in his way. Meanwhile the Wolf manages to stay a step ahead of him, blowing up bridges in New York City and London as well as a bridge and an entire neighborhood in Paris.

Just outside of Nice, France, Alex follows a Mercedes CL55 in a breakneck race down a winding mountain road. When the car catapults over the mountain and crashes onto the highway below, Alex thinks he has caught the Wolf; but the dead man turns out to be Martin Lodge, the head of Scotland Yard.

Back in New York City, down streets and over rooftops, Alex and Nat chase a man they think is the Wolf, a man who has just had plastic surgery. They watch him fall from a rooftop and die in the alley, but it turns out that he is not the Wolf.

In another twist, Alex discovers that his family has disappeared. He then receives an email from Martin Lodge’s widow, Klara, claiming to be the Wolf and saying that his family will soon be returned.

Alex strains the relationship between the FBI and the CIA, talking to everybody from junior analysts to the new CIA director, James Dowd. Dowd tells Alex that, while investigating the murdered CIA director Weir, it was learned that a Russian, Anton Christyakov, had been recruited by the CIA and brought out of Russia in 1990, when he was transported to England to meet with agents, including Martin Lodge. Christyakov was then moved to Paris, where he reunited with his family. In 1994, when his home was blown up and his family killed, Christyakov blamed the CIA. He is known to squeeze a black rubber ball his son had given him whenever he is angry or upset.

Alex goes to see Tolya Bykov, the man at or near the top of the Red Mafiya. After a useless meeting with him, he leaves the house and notices something about one of the bodyguards: he’s squeezing a black rubber ball. Alex chases him down and jumps into the car he has started, punching and breaking his nose. The man bites down on something and Alex realizes it’s poison. The man convulses and dies in the seat of the expensive car. Alex retrieves the ball as a trophy, telling himself that the Wolf is finally dead.

“This is just a warm-up. Just the beginning of something great. My masterpiece. My payback.” Part 1, Chapter 5, pg. 20

Then he and Christine disappeared inside and I was on the outside, alone, walking back to my rental car with my hands stuffed deep in my pockets, wondering what it was all about, missing my small son already, missing him badly, wondering if it would always be as heartbreaking as this, knowing that it would be. Part 1, Chapter 6, pg. 24

Pre-Order The Next Alex Cross Novel 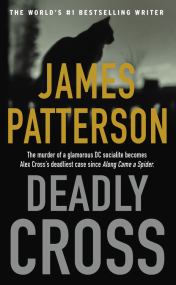 A double homicide in the nation’s capital opens the psychological case files — of Detective Alex Cross.
Kay Willingham led a life as glamorous as it was public-she was a gorgeous Georgetown socialite, philanthropist, and the ex-wife of the vice president. So why was she parked in a Bentley convertible idling behind a DC private school, in the middle of the night, with the man who was the head of that school? Who shot them both, point blank, and why? The shocking double homicide is blazed across the internet, TV, newspapers — and across Alex Cross’s mind. Kay had been his patient once. And maybe more.
While John Sampson of DC Metro Police investigates the last movements of Christopher Randall, the educator killed along with Kay Willingham, detective Alex Cross and FBI special agent Ned Mahoney find unanswered questions from Willingham’s past, before she arrived in DC and became known in DC society as someone who could make things happen. They travel to Alabama to investigate Kay’s early years. There they find a world of trouble, corruption, and secrets, all of them closed to outsiders like Cross and Mahoney.
Kay had many enemies, but all of them seemed to need her alive. The harder the investigators push, the more resistance they find when they leave behind the polite law offices and doctors’ quarters of the state capital. Alex Cross will need to use all his skills as a doctor, a detective, and a family man to prevent that resistance from turning lethal…again.