True crime readers expect your writing to capture the thrill of a suspense novel, while holding the factual integrity of an academic journal—no easy feat. Here are my tips for writing great true crime books.

True crime stories are so interesting that writers are often tempted to veer toward sensationalism. Action is fantastic, but gore is not (in most cases). Writers are documenting the stories of real victims who have families; their communities might still be suffering. Concentrate on crafting a narrative that’s mysterious, even horrifying without resorting to tasteless tripe.

2. Sort out why this is the story you want to tell because that answer will often drive the narrative.

Two writers will invariably highlight different themes about the same case. In my true crime book, Death in the Air the serial killer, John Reginald Christie, is a scene-stealer. He’s creepy, devious and fascinating, but he also distracts the reader’s attention. The victims in true crime stories are often used as plot devices—avoid that. Be clear up front with the reader about your intentions and you’ll set yourself apart.

3. Remember that the victims are frequently women.

This is an important note, particularly for male writers, because most true crime readers are women. When I began structuring Death in the Air I was immediately frustrated with my own writing because I had no female point of view in the sections about Christie (the book is also about a killer fog that simultaneously murdered thousands of people in London).

I chose to give Christie’s first victim a voice even as she lay buried in his backyard. I described when he buried plants above her, how his dog unearthed her skull. I used a similar technique with his other victims. Find ways to highlight characters in true crime that may be lost and give them an authentic voice.

4. The themes of the best true crime stories have a real bearing on the present day.

Death in the Air addresses air pollution and wrongful conviction. Don’t chase the most lurid story, but one with real richness, multiple layers and lasting consequence.

Kate Winkler Dawson is the author of Death in the Air: The True Story of a Serial Killer, the Great London Smog, and the Strangling of a City. Kate is also a seasoned documentary producer, whose work has appeared in The New York Times, WCBS News and ABC News Radio, Fox News Channel, United Press International, PBS NewsHour, and Nightline. She teaches journalism at The University of Texas at Austin. 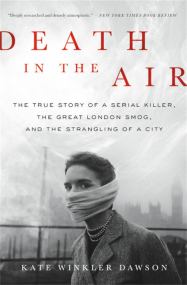 London was still recovering from the devastation of World War II when another disaster hit: for five long days in December 1952, a killer smog held the city firmly in its grip and refused to let go. Day became night, mass transit ground to a halt, criminals roamed the streets, and some 12,000 people died from the poisonous air. But in the chaotic aftermath, another killer was stalking the streets, using the fog as a cloak for his crimes.
All across London, women were going missing—poor women, forgotten women. Their disappearances caused little alarm, but each of them had one thing in common: they had the misfortune of meeting a quiet, unassuming man, John Reginald Christie, who invited them back to his decrepit Notting Hill flat during that dark winter. They never left.

Read an Exclusive Excerpt From Death In The Air

This item is a preorder. Your payment method will be charged immediately, and the product is expected to ship on or around November 13, 2018. This date is subject to change due to shipping delays beyond our control.