If you love sci-fi thrillers or space murder mysteries, you’ll love reading Mur Lafferty’s Six Wakes, a genre mash-up that will have you on the edge of your seat. If you’re a writer yourself, Lafferty has six tips that will help you write a great mystery novel, too—and she keeps it interesting by making all of her rules contradictory.

Rule #1: Know your murderer before you start writing.

If you know who your ultimate criminal is, you can write the whole book while posting clues and red herrings throughout because you know exactly where you’re going.

Rule #2: Don’t know your murderer before you start writing.

Take an ensemble cast, give them all a motive for committing the murder(s). Make sure they all have opportunities to interact with the victim(s). When you get to your climax and you can see that everyone still would have had the chance to be the murderer, then you choose someone.

Rule #3: Your hero should have some flaws.

While the alcoholic detective who is terrible with women is somewhat of a cliche, the truth is you do need to have a character who has their own internal demons to fight as they solve the murders externally. It makes them much more relatable and adds layers of conflict to your story.

Rule #4: Your hero should be infallible.

Before you tell me that this won’t work, let me go and fetch the sales numbers for Agatha Christie, the world’s bestselling author of all time. Murder on the Orient Express sold 3 million copies—in 1974 alone. Anyway, Miss Marple and Hercule Poirot can be said to have flaws like, um, Poirot is full of himself—but it’s not hubris because he’s right when he says he’s the world’s greatest detective.

Lay the suspects, make your detective be the one to solve the case, kill the victim in the first third of the story. If you break these rules, the reader won’t trust you.

One book title for you: The Murder of Roger Akroyd. The narrator—the first person POV watching Poirot investigate Ackroyd’s murder—is revealed to be the murderer.

Mur Lafferty is a writer, podcast producer, gamer, runner, and geek. She is the host of the podcast I Should Be Writing and the co-host of Ditch Diggers. She is the winner of the 2013 John W. Campbell Award for Best New Writer. She is addicted to computer games, Zombies, Run!, and Star Wars LEGO. She lives in Durham, NC with her husband and daughter. 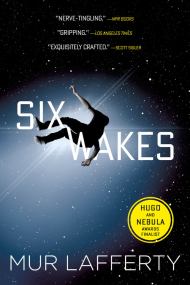 In this Hugo nominated science fiction thriller by Mur Lafferty, a crew of clones awakens aboard a space ship to find they’re being hunted-and any one of them could be the killer.
Maria Arena awakens in a cloning vat streaked with drying blood. She has no memory of how she died. This is new; before, when she had awakened as a new clone, her first memory was of how she died.
Maria’s vat is one of seven, each one holding the clone of a crew member of the starship Dormire, each clone waiting for its previous incarnation to die so it can awaken. And Maria isn’t the only one to die recently. . .
Unlock the bold new science fiction thriller that Corey Doctorow calls Mur’s “breakout book”.

This item is a preorder. Your payment method will be charged immediately, and the product is expected to ship on or around January 31, 2017. This date is subject to change due to shipping delays beyond our control.