The first big novel of 2022: an epic literary thriller set where America is right now, in which a band of unlikely heroes sets out… 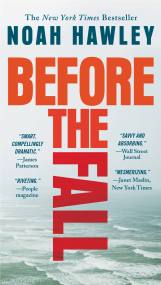