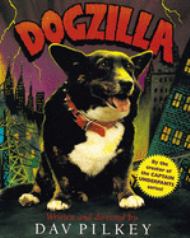 “Dogzilla” is a fun children’s book from Dav Pilkey who has also given us “Kat Kong”. “Dogzilla” is Mr. Pilkey’s retelling of the story of Godzilla using a dog for the monster and mice as the citizens of the city being terrorized. The terrible Dogzilla rises from a volcano just as the people of Mousopolis are beginning the city’s barbeque cook-off. Awoken by the smell of cooking meat Dogzilla attacks the Big Cheese’s army with its doggy breath, but is turned away with the threat of a bath. Thinking that the they have successfully turned Dogzilla away, the mice hold their cook-off again the following year. Will the threat of a bath truly keep the mighty Dogzilla away? You have to read “Dogzilla” to find out and experience the twist ending. “Dogzilla” is the natural addition to “Kat Kong” but it doesn’t pack the punch of its predecessor. There are fewer clever play on words that make the first book appealing to adults, and the story doesn’t seem as fun to read out loud. Dav Pilkey’s illustrations still provide a great visual experience. The collage style is intriguing, and Mr. Pilkey still uses pictures of his pets as the models for the characters in “Dogzilla”. Preschool and Kindergarten aged children will enjoy the story of “Godzilla”, and will be drawn in by the unique style Mr. Pilkey uses to illustrate the story.